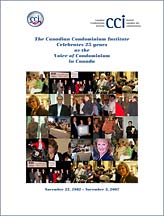 November 22, 1982 – November 3, 2007
The first meeting of the Canadian Condominium Institute was held November 25, 1982 at Toronto's Inn on the Park Hotel. Those in attendance were identified as 'founding members' of the CCI. The first CCI President was Mr. Claude Renaud.

The purposes for the creation CCI as a not-for-profit association were many, and are more particularly set out in the Institute's Letters Patent, but generally, the purpose of the Institute was to become the focal point of condominium in Canada.

To read a complete history of the Canadian Condominium Institute, please download our 25th Anniversary Booklet (PDF), presented at our Anniversary Dinner on Saturday, November 3rd, 2007 by Deborah Howes.